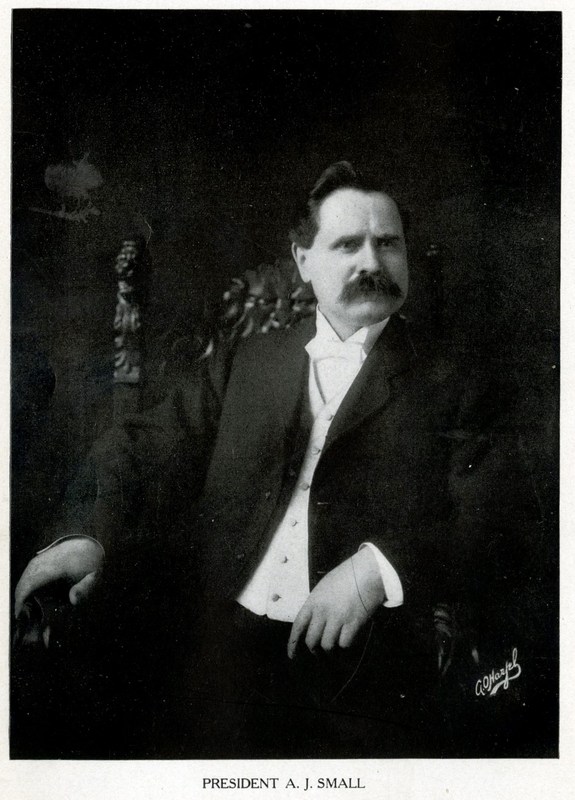 The American Association of Law Libraries

Prior to 1906, law libraries were individual institutions, more or less secluded and segregated. Professional connections were sparse, and law librarians had limited opportunities to make acquaintances or acquire professional knowledge and training. With this great disconnect within the community came the inspiration of creating the American Association of Law Libraries (AALL). Unfortunately a complete record of the first meeting was not published, but a short memorandum note is found in Public Libraries, v. II, p. 459, as follows: "Pursuant to a call in which twenty-four law libraries joined, there was formed at the conference of the American Library Association at Narragansett Pier, in July, 1906, the American Association of Law Libraries. The purpose of this new organization is to develop and increase the usefulness and efficiency of the law libraries of the United States and Canada." The ten founders of the AALL chose A.J. Small as their first president and leader, he went on to serve for two consecutive terms.

No annual meeting of the American Association of Law Libraries was complete without the presence of A.J. Small. The much beloved first president, who in later years came to be known as the distinguished elder statesmen of the AALL, was a shining model of the ideal law librarian, not only devoted to the interests of his own library, but also always willing to share with his fellow librarians his technical knowledge and experience to improve library service throughout the country. 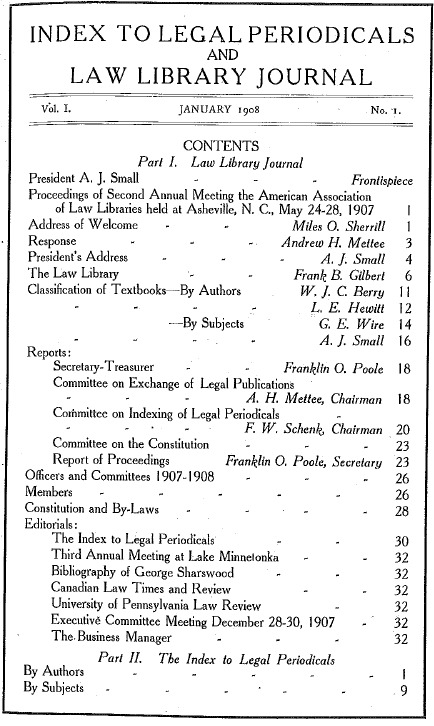 During his stewardship as the President of the AALL, the first important work of the association was to develop professional publications. The first AALL committee on publications consisted of Frederick W. Schenk, Fank B. Gilbert, and Gilson G. Glasier, and it was appointed by President Small to study the feasibility of publishing an index to legal periodicals and a journal of current law library information. The first issue of the Index to Legal Periodicals and the Law Library Journal was published in Janurary 1908.

In 1909, A.J. Small then went on to complete the Index to the Iowa State Bar Association Proceedings, v. 1-15, 1895-1909 and in 1912 he compiled the Proceedings of the Early Iowa State Bar Association, 1874-1881. He was also the compiler of the Bibliographical and Historical Check List of Proceedings of Bar and Allied Associations, which was issued under the auspices of the AALL in 1923. This valuable compilation was later revised by A.J. Small and published as Appendix VIII (p. 440-491) in Hicks, Materials and Methods of Legal Research, 1933.

A.J. Small endeared himself to hundreds of librarians, who respected him for his thorough knowledge of law books and his keen sense of logic for solving issues surrounding law library collections of the time.