Iowa as a Territory

One of the most important Acts that Congress passed was the Northwest Ordinance of 1787. It set up a system of government for the territory that became the states of Illinois, Indiana, Ohio, Michigan and Wisconsin. It was a model for other U.S. territories to follow when they wanted to become states. The United States government opened Iowa for settlement by non-native people in 1833. Law enforcement was lax in the area and the need for a formal structure of government led to the attachment of the "Iowa" area to Michigan, with a capital at Detroit in 1834. As Michigan prepared for its own admission as a state, Iowa was transferred to the Wisconsin Territory in 1836.

Major Jerry Smith, a member of the Wisconsin Territorial Legislature representing Des Moines County, offered to build a "suitable" building for the Legislature to meet if they agreed to move the territorial capital to Burlington, Iowa. In 1837, Major Smith built a two -story frame building, 40 x70 feet. The House of Representatives occupied one floor, and the Council occupied the other. Major Smith's sturcture burned down on December 12, 1837. 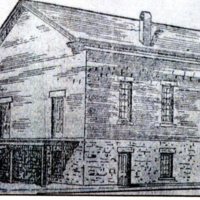