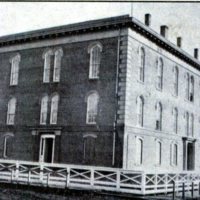 With the influx of settlers to Iowa, citizens felt the state's capital should be moved to a more central location. The issue was the subject of intense political debate for over a decade. Ultimately, the Iowa General Assembly chose Des Moines as the new capital city. The 1857 Constitution established Des Moines as the capital. The commissioners appointed to choose a site decided on land donated by Wilson Alexander Scott and Harrison Lyon. Located on the east side of the Des Moines River, on a gently rising hill, the site for the Iowa State Capitol began with fewer than 10 acres. Cconstruction began on the new Capitol in 1856. The Old Brick Capitol was built in the center of that 10-acre plot, and the area to the north was used as a public park until work began on the present day Capitol.This structure, which became known as Old Brick Capitol.  Old Brick Capitol served as Iowa's Capitol for 26 years and was destroyed by fire in 1892. The Soldier's and Sailor's Monument now occupies the site, which is directly south of the present Capitol building. 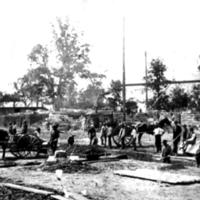 Laying the Foundation for the Capitol

The General Assembly established a Capitol Commission in 1870 to select an architect and a building plan, and to proceed with the construction of a new Capitol. The cost of the building was not to exceed $1,500,000, and was to be completed without increasing taxes. John C. Cochrane and A. H. Piquenard were chosen as architects, and a cornerstone was laid on November 23, 1871. The original cornerstone had to be replaced when much of the foundation stone deteriorated during the severe winter.

Under the direction of a smaller, full-time Capitol Commission appointed in 1872, a second cornerstone was laid on September 29, 1873. Cochrane resigned his position in 1872, but Piquenard continued until his death in 1876. Piquenard was succeeded by two of his assistants, M. E. Bell and W.F. Hackney. Bell resigned in 1883 to become supervising architect for the Treasury Department in Washington, D.C., but Hackney continued until the completion of the building.

In 1884, the two-year process of moving from the Old Brick Capitol to the new Capitol began. The state commissioned John Weidenman to design the first formal decoration of the grounds. Weidenman’s plans for the west approach to the Capitol included plantings, statues, and walkways. The building was completed in 1886. 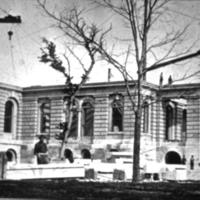 Officials Move into the Building

The building was dedicated in January 1884, when the General Assembly first met in the new chambers. The Governor and other state officials moved into their offices in 1885 and the Supreme Court Chamber was dedicated in 1886. The cost of the building totaled $2,873,294.59. An audit showed only $3.77 unaccounted for in fifteen years. Unfortunately, the commission did not have an additional $30,000 needed to finish the interior decorative painting and build the south and west steps.