Irving Weber began writing articles on the history of the city in 1973 for the Iowa City Press Citizen. These articles collectively became the 8 volumes known as "Irving Weber's Iowa City." Part recollection, part research each article conveys a part of the city's story from its founding until the mid 1990s. There are 482 articles in the 8 volumes, many with photographs. Weber brought the history of Iowa City to life with insight, friendly wit and a sharp detailed memory.

Kitchen-Klatter began as a half-hour radio show with Leanna Driftmier sharing household tips, recipes, and childrearing advice among other topics. The radio show aired from 1926-1986 in Shenandoah, Iowa making it the longest running homemaker program in the history of radio. Kitchen Klatter magazine was issued monthly from 1936-1986 and at one point had a circulation of 150,000. 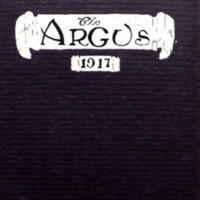 A collection of Ottumwa High School Yearbooks going back to the early 1900s. 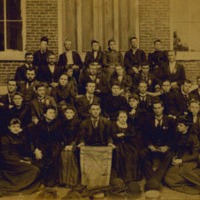 This collection includes published histories of the college bulletins and college catalogs of William Penn University in Oskaloosa, Iowa. 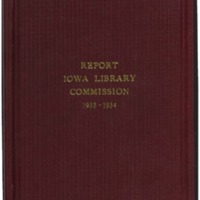 Report of the Iowa Library Commission

Reports of the Iowa Library Commission

The Iowa Library Commission was established in 1900. The Commission was engaged in promoting public libraries, providing Traveling Library collections to the entire state, advocating training opportunities for librarians, advising readers on Iowa library laws, publishing the gathered statistics of Iowa libraries, and much more. This collection consists of the biannual reports of the Iowa Library Commission made to the Governor of Iowa. The dates range from 1900 to 1938. 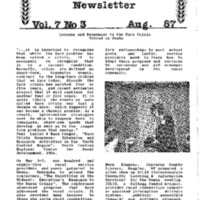 Sketch is a literary journal edited and published by Iowa State University students, that encourages all Iowa State students, regardless of year or major to submit works of artistic expression, written or visual. The journal began in 1934, featuring juried works by student writers and artists, and continues to the present, with one to three issues produced each academic year.