This collection contains images from the Mahaska County Historical Society located at 2294 Oxford Avenue, Oskaloosa, Iowa. The collection has numerous images of the history of Mahska County.

This collection contains images from the early settlement of Mahaska County until the mid-twentieth century. Township maps are also included. 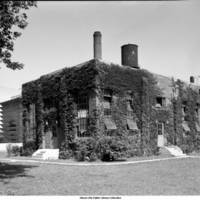 The Historical Department of the Mason City Public Library has an impressive photographic collection of over 100,000 images, dating back to the earliest days of Mason City. The collection consists of both photographic negatives and prints. A significant part of the collection comes from three local photographers: Walter Burton Wright, Safford Lock, and Elwin Musser. 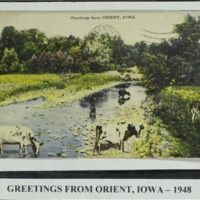 This is a collection of photographs, postcards, documents and other historical items which give a glimpse into the history of Orient, Iowa.

This collection was created or collected by Chuck Russell, one of the most active citizens of Oskaloosa.

This collection contains images from the Oskaloosa Public Library in Oskaloosa, Iowa.

This collection includes images from the first buildings of Penn College and the current campus of William Penn University in Oskaloosa, Iowa. 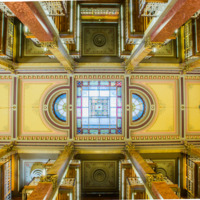 A collection of photographs by Ben Easter of the Iowa Law Library, one of the most magestic libraries in the world. Located in the Capitol building, the law library provides Iowa lawmakers, government employees, the Iowa legal community and the general public with a highly specialized legal collection of treatises and both state and federal statutory, regulatory and case law.

The Department of Physical Education for Women at The University of Iowa was a pioneer in the development of graduate study and professional training as well as athletic opportunities for women. The records of the department held by the Iowa Women's Archives span more than 100 years and include pamphlets, correspondence, scrapbooks, newspaper clippings, and films. Featured here are nearly 1000 digitized photographs from the collection.

The UNI campus features many large outdoor sculptures. Most of these works are the result of Iowa Code 304A.10, which requires that one half of one percent of the budget for new or significantly renovated state buildings be devoted to the purchase of works of art.

Over the last thirty years, local and nationally-known artists have worked in various media to produce the large pieces scattered around campus. The installation of some pieces has provoked storms of critical reaction. Other pieces seemed to fit so well into the landscape that few people noticed them.