Christian Petersen, who sculpted and taught at Iowa State University from 1934 through 1955, is considered the founder of the Art on Campus Collection. He was the nation’s first permanent campus artist-in-residence. The Christian Petersen Digital Collection, 1934-1942, contains images from a number of series in the Christian Petersen papers, including photographs of Petersen in his studio and working with students, drawings and sketches by Petersen that were published in Cha-ki-shi based on the Mesquakie of Iowa, and Hello Beautiful written by Charlotte Petersen for their daughter Mary. Photographs and artifacts also highlight Petersen’s sculptural works that include medals, a plaster study of four running buffalo, the Dairy Science bas relief, and the Marriage Ring.

In celebration of the 125th anniversary of the University of Iowa College of Dentistry, class photo boards (1883-1967) were converted to digital format as part of the preservation process. This digital collection includes photo boards that display entire classes as well as individual, high-resolution student and faculty photographs.

Dr. Morehouse and Astronomy at Drake

This collection contains publications and photographs related to astronomer Dr. Daniel Walter Morehouse’s tenure as Drake University President from 1922-1941 as well as his activities in the field of astronomy. He became an astronomy professor at Drake in 1914 and continued teaching at least one  astronomy course each semester after becoming president. He discovered a comet in 1908 while studying for his graduate degree at the University of Chicago. 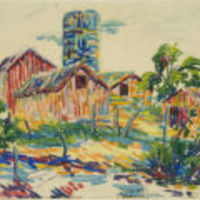 In 1924, native Iowan Eve Drewelowe received the first graduate degree in fine arts granted by The University of Iowa. She then married Jacob Van Ek, moved to Boulder, and embarked on a 13-month trip around the world that she documented in seven travel sketchbooks. After a health crisis in 1940, Drewelowe rededicated herself to her painting. Working in impressionist, social realist, and abstract expressionist styles, she has had artworks displayed nationally in solo exhibitions. Drewelowe continued to paint until her death in 1988.