Alexander Lippisch was born in Germany and during World War II, he worked on designing   high-speed fighter aircraft. After the war,  he came to the United States and worked on designing jet-powered delta-wing aircraft. The Alexander Lippisch Collection contains photographs and drawings of his work in aeronautical engineering. Lippisch designed sailplanes and gliders, delta winged aircraft, and aerodynes,
The Iowa Agricultural College newspaper "The Aurora" was published monthly by the students for the four literary societies on campus (The Philomathean (1868); The Bachelor (1870); the Cliolians (1870) and the Crescent (1870)).. The Aurora contains essays, reviews, and musings relating to culture, reading, and science, as well as local notes relating to alumni, the campus, and student activities and life. Representative issues in this collection are from the years 1874-1893. 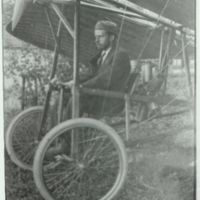 William C. Robinson came to live in Grinnell, at the age of 12, in 1896. He was a handyman, tinkerer, and bicycle repairman who designed and built his own flying machine.  In 1911, with the help of Charles Hink, Robinson constructed a 60 horse power radial motor for his monoplane.  In 1914 he set a record for non-stop flight, carrying mail from Des Moines to Kentland, Indiana. Robinson perished, while flying his biplane, attempting to set an altitude record on March 11, 1916.

During the mid-1800's photography became a popular hobby and natural tool for scientists. Samuel Calvin, Professor of Natural Sciences at the University of Iowa (1873-1911) and State Geologist, took more than 5,000 photographs, which he used to illustrate specific geological features for class instruction, public lectures, and publications. In addition to geological landscapes and features, Calvin and his colleagues documented mines, quarries, mills, and other buildings. The collection, held by the University of Iowa Department of Geoscience, also contains portraits of Calvin's family, colleagues, and classes in the field.

his collection contains buttons, pins and badges relating to the women's suffrage movement that Carrie Chapman Catt was involved in. There is also a photograph of her and a letter from President Woodrow Wilson. 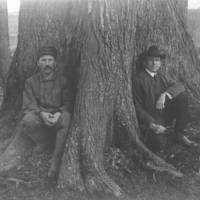 Charles Reuben Keyes (May 5, 1871-July 23, 1951) graduated from Cornell College with a B.A. in philosophy in 1894, earned a master’s degree in 1898 from Harvard, and a doctoral degree, also from Harvard, in 1923. He was professor of German at Cornell College from 1903-1941. His avocations, studying ornithology as well as the archaeology and anthropology of Native Americans became driving forces in his life. The photos, letters, essays and articles in this digital collection represent these interests of a well-respected and patient individual whose contributions to Cornell College and the State of Iowa are still felt today.