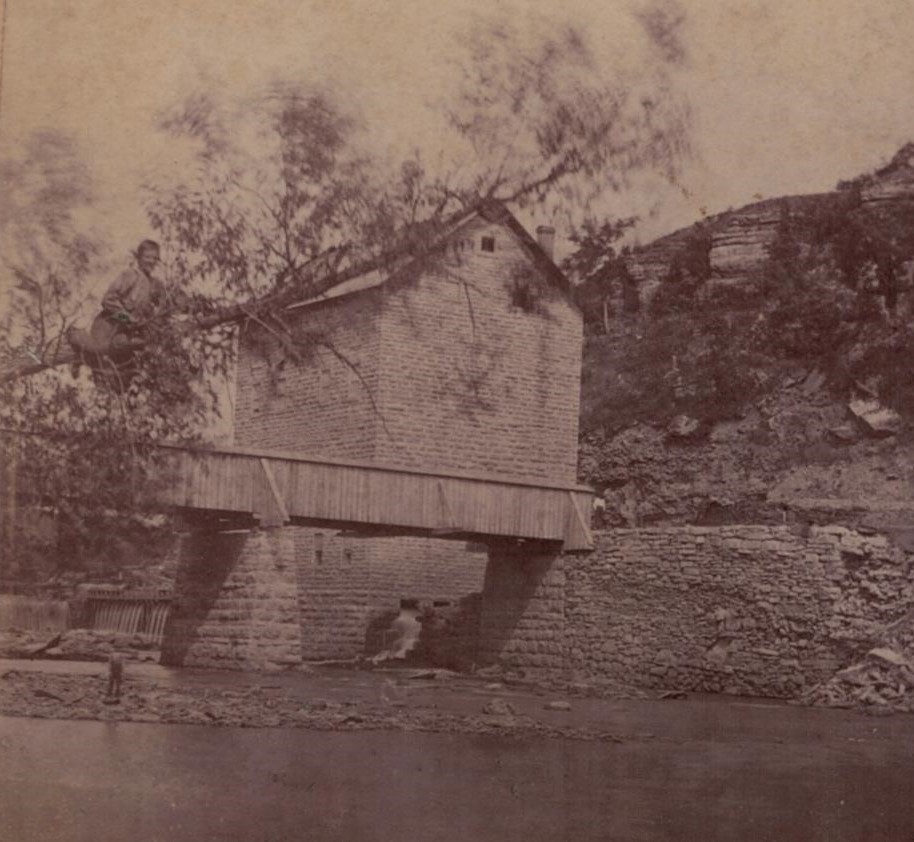 Motor Mill is located on the Turkey River six miles down stream from Elkader. This six story structure stands approximately fifty feet wide, sixty feet long and over ninety feet high with walls that are five feet thick at the bottom, tapering to two feet at the top. The huge limestone blocks were quarried and transported by cable car from the bluffs above the mill. The mill, built by John Thompson, displays the handiwork of four skilled German masons from Communia. Each wall was constructed by a different mason who was trying to outdo the other masons. Three sides were laid with carefully chipped rounded stone while the fourth, the intake side, was laid with perfectly square cut stone. No two sides are alike. All beams were pegged in and not one nail was used in construction. The wheels and burrs were imported from Italy. The original bridge at Motor was a high-sided wooden structure built in 1868. According to John Thompson’s request for bids, the bridge had three 54 foot spans 16 feet wide. The north and south end had a 15 foot approach made of timber and plank. The three spans were Howe Truss and the 5 or 6 foot high wooden sides were simply added to enclose the trusses. More up to date pictures of Motor Mill can be found at millpictures.com . More information on Motor Mill can be found at www.motormill.org or www.claytonconservation.org
This may be the only photo remaining that was taken while the mill was still in operation. Shown is the first bridge at the Motor location with its significant sidewalls and one of the three stone piers. Also shown is a section of the dam with water spilling over it and visiable is a good portion of the mill race or flume with spaced openings allowing water drainage. Three men posed for the photographer, one in the tree, another on the river bank and a third at the end of the bridge.