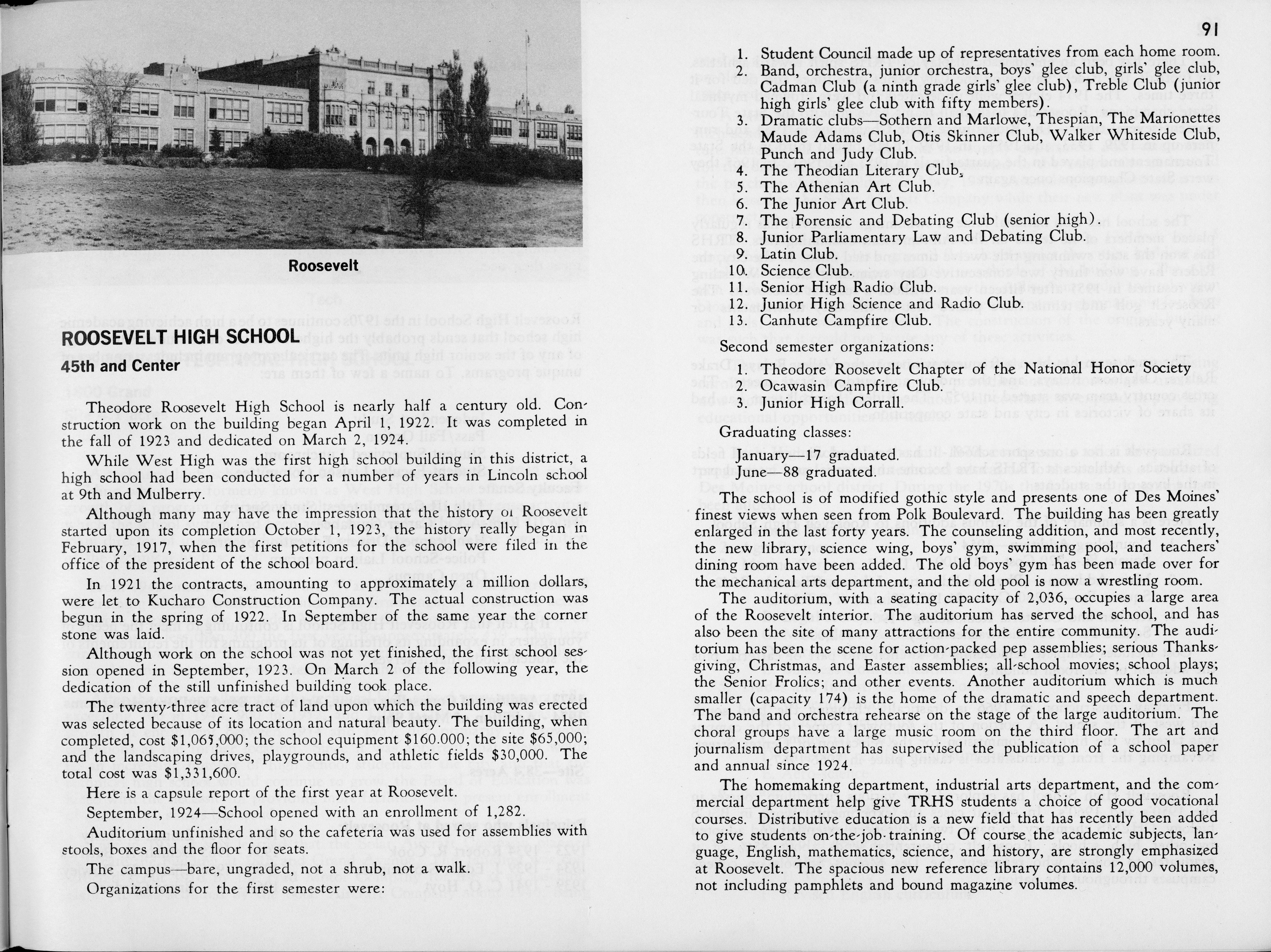 91 Roosevelt (Photograph) ROOSEVELT HIGH SCHOOL 45th and Center Theodore Roosevelt High School is nearly half a century old. Construction work on the building began April 1, 1922. It was completed in the fall of 1923 and dedicated on March 2, 1924. While West High was the first high school building in this district, a high school had been conducted for a number of years in Lincoln school at 9th and Mulberry. Although many may have the impression that the history oi Roosevelt started upon its completion October 1, 1923, the history really began in February, 1917, when the first petitions for the school were filed in the office of the president of the school board. In 1921 the contracts, amounting to approximately a million dollars, were let to Kucharo Construction Company. The actual construction was begun in the spring of 1922. In September of the same year the corner stone was laid. Although work on the school was not yet finished, the first school session opened in September, 1923. On March 2 of the following year, the dedication of the still unfinished building took place. The twenty-three acre tract of land upon which the building was erected was selected because of its location and natural beauty. The building, when completed, cost $1,065,000; the school equipment $160,000; the site $65,000; and the landscaping drives, playgrounds, and athletic fields $30,000. The total cost was $1,331,600. Here is a capsule report of the first year at Roosevelt. September, 1924â€”School opened with an enrollment of 1,282. Auditorium unfinished and so the cafeteria was used for assemblies with stools, boxes and the floor for seats. The campusâ€”bare, ungraded, not a shrub, not a walk. Organizations for the first semester were: 1. Student Council made up of representatives from each home room. 2. Band, orchestra, junior orchestra, boys' glee club, girls' glee club, Cadman Club (a ninth grade girls' glee club), Treble Club (junior high girls' glee club with fifty members). 3. Dramatic clubsâ€”Sothern and Marlowe, Thespian, The Marionettes Maude Adams Club, Otis Skinner Club, Walker Whiteside Club, Punch and Judy Club. 4. The Theodian Literary Club. 5. The Athenian Art Club. 6. The Junior Art Club. 7. The Forensic and Debating Club (senior high). 8. Junior Parliamentary Law and Debating Club. 9. Latin Club. 10. Science Club. 11. Senior High Radio Club. 12. Junior High Science and Radio Club. 13. Canhute Campfire Club. Second semester organizations: 1. Theodore Roosevelt Chapter of the National Honor Society 2. Ocawasin Campfire Club. 3. Junior High Corrall. Graduating classes: Januaryâ€”17 graduated. Juneâ€”88 graduated. The school is of modified gothic style and presents one of Des Moines' finest views when seen from Polk Boulevard. The building has been greatly enlarged in the last forty years. The counseling addition, and most recently, the new library, science wing, boys' gym, swimming pool, and teachers' dining room have been added. The old boys' gym has been made over for the mechanical arts department, and the old pool is now a wrestling room. The auditorium, with a seating capacity of 2,036, occupies a large area of the Roosevelt interior. The auditorium has served the school, and has also been the site of many attractions for the entire community. The auditorium has been the scene for action-packed pep assemblies; serious Thanksgiving, Christmas, and Easter assemblies; all-school movies; school plays; the Senior Frolics; and other events. Another auditorium which is much smaller (capacity 174) is the home of the dramatic and speech department. The band and orchestra rehearse on the stage of the large auditorium. The choral groups have a large music room on the third floor. The art and journalism department has supervised the publication of a school paper and annual since 1924. The homemaking department, industrial arts department, and the commercial department help give TRHS students a choice of good vocational courses. Distributive education is a new field that has recently been added to give students on-the-job-training. Of course the academic subjects, language, English, mathematics, science, and history, are strongly emphasized at Roosevelt. The spacious new reference library contains 12,000 volumes, not including pamphlets and bound magazine volumes.