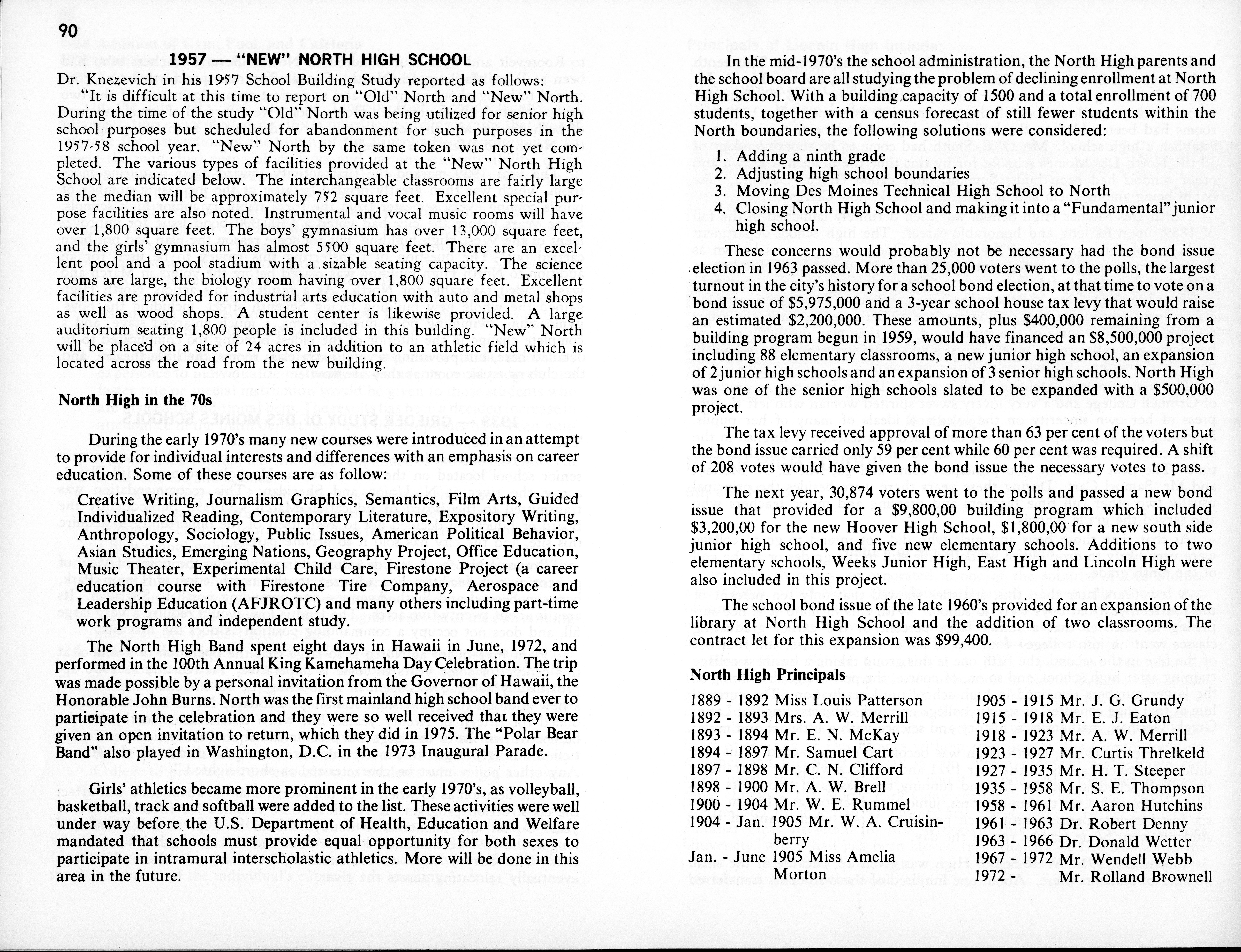 90 1957 "NEW" NORTH HIGH SCHOOL Dr. Knezevich in his 1957 School Building Study reported as follows: "It is difficult at this time to report on "Old" North and "New" North. During the time of the study "Old" North was being utilized for senior high school purposes but scheduled for abandonment for such purposes in the 1957-58 school year. "New" North by the same token was not yet completed. The various types of facilities provided at the "New" North High School are indicated below. The interchangeable classrooms are fairly large as the median will be approximately 752 square feet. Excellent special purpose facilities are also noted. Instrumental and vocal music rooms will have over 1,800 square feet. The boys' gymnasium has over 13,000 square feet, and the girls' gymnasium has almost 5500 square feet. There are an excellent pool and a pool stadium with a sizable seating capacity. The science rooms are large, the biology room having over 1,800 square feet. Excellent facilities are provided for industrial arts education with auto and metal shops as well as wood shops. A student center is likewise provided. A large auditorium seating 1,800 people is included in this building. "New" North will be placed on a site of 24 acres in addition to an athletic field which is located across the road from the new building. North High in the 70s During the early 1970's many new courses were introduced in an attempt to provide for individual interests and differences with an emphasis on career education. Some of these courses are as follow: Creative Writing, Journalism Graphics, Semantics, Film Arts, Guided Individualized Reading, Contemporary Literature, Expository Writing, Anthropology, Sociology, Public Issues, American Political Behavior, Asian Studies, Emerging Nations, Geography Project, Office Education, Music Theater, Experimental Child Care, Firestone Project (a career education course with Firestone Tire Company, Aerospace and Leadership Education (AFJROTC) and many others including part-time work programs and independent study. The North High Band spent eight days in Hawaii in June, 1972, and performed in the 100th Annual King Kamehameha Day Celebration. The trip was made possible by a personal invitation from the Governor of Hawaii, the Honorable John Burns. North was the first mainland high school band ever to participate in the celebration and they were so well received that they were given an open invitation to return, which they did in 1975. The "Polar Bear Band" also played in Washington, D.C. in the 1973 Inaugural Parade. Girls' athletics became more prominent in the early 1970's, as volleyball, basketball, track and softball were added to the list. These activities were well under way before the U.S. Department of Health, Education and Welfare mandated that schools must provide equal opportunity for both sexes to participate in intramural interscholastic athletics. More will be done in this area in the future. In the mid-1970's the school administration, the North High parents and the school board are all studying the problem of declining enrollment at North High School. With a building capacity of 1500 and a total enrollment of 700 students, together with a census forecast of still fewer students within the North boundaries, the following solutions were considered: 1. Adding a ninth grade 2. Adjusting high school boundaries 3. Moving Des Moines Technical High School to North 4. Closing North High School and making it into a "Fundamental" junior high school. These concerns would probably not be necessary had the bond issue election in 1963 passed. More than 25,000 voters went to the polls, the largest turnout in the city's history for a school bond election, at that time to vote on a bond issue of $5,975,000 and a 3-year school house tax levy that would raise an estimated $2,200,000. These amounts, plus $400,000 remaining from a building program begun in 1959, would have financed an $8,500,000 project including 88 elementary classrooms, a new junior high school, an expansion of 2 junior high schools and an expansion of 3 senior high schools. North High was one of the senior high schools slated to be expanded with a $500,000 project. The tax levy received approval of more than 63 per cent of the voters but the bond issue carried only 59 per cent while 60 per cent was required. A shift of 208 votes would have given the bond issue the necessary votes to pass. The next year, 30,874 voters went to the polls and passed a new bond issue that provided for a $9,800,00 building program which included $3,200,00 for the new Hoover High School, $1,800,00 for a new south side junior high school, and five new elementary schools. Additions to two elementary schools, Weeks Junior High, East High and Lincoln High were also included in this project. The school bond issue of the late 1960's provided for an expansion of the library at North High School and the addition of two classrooms. The contract let for this expansion was $99,400. North High Principals 1889 - 1892 Miss Louis Patterson 1892 - 1893 Mrs. A. W. Merrill 1893 - 1894 Mr. E. N. McKay 1894 - 1897 Mr. Samuel Cart 1897 - 1898 Mr. C. N. Clifford 1898 - 1900 Mr. A. W. Brell 1900 - 1904 Mr. W. E. Rummel 1904 - Jan. 1905 Mr. W. A. Cruisinberry Jan. - June 1905 Miss Amelia Morton 1905 - 1915 Mr. J.G. Grundy 1915 - 1918 Mr. E.J. Eaton 1918 - 1923 Mr. A.W. Merrill 1923 - 1927 Mr. Curtis Threlkeld 1927 - 1935 Mr. H.T. Steeper 1935 - 1958 Mr. S.E. Thompson 1958 - 1961 Mr. Aaron Hutchins 1961 - 1963 Dr. Robert Denny 1963 - 1966 Dr. Donald wetter 1967 - 1972 Mr. Wendell Webb 1972 - Mr. Rolland Brownell