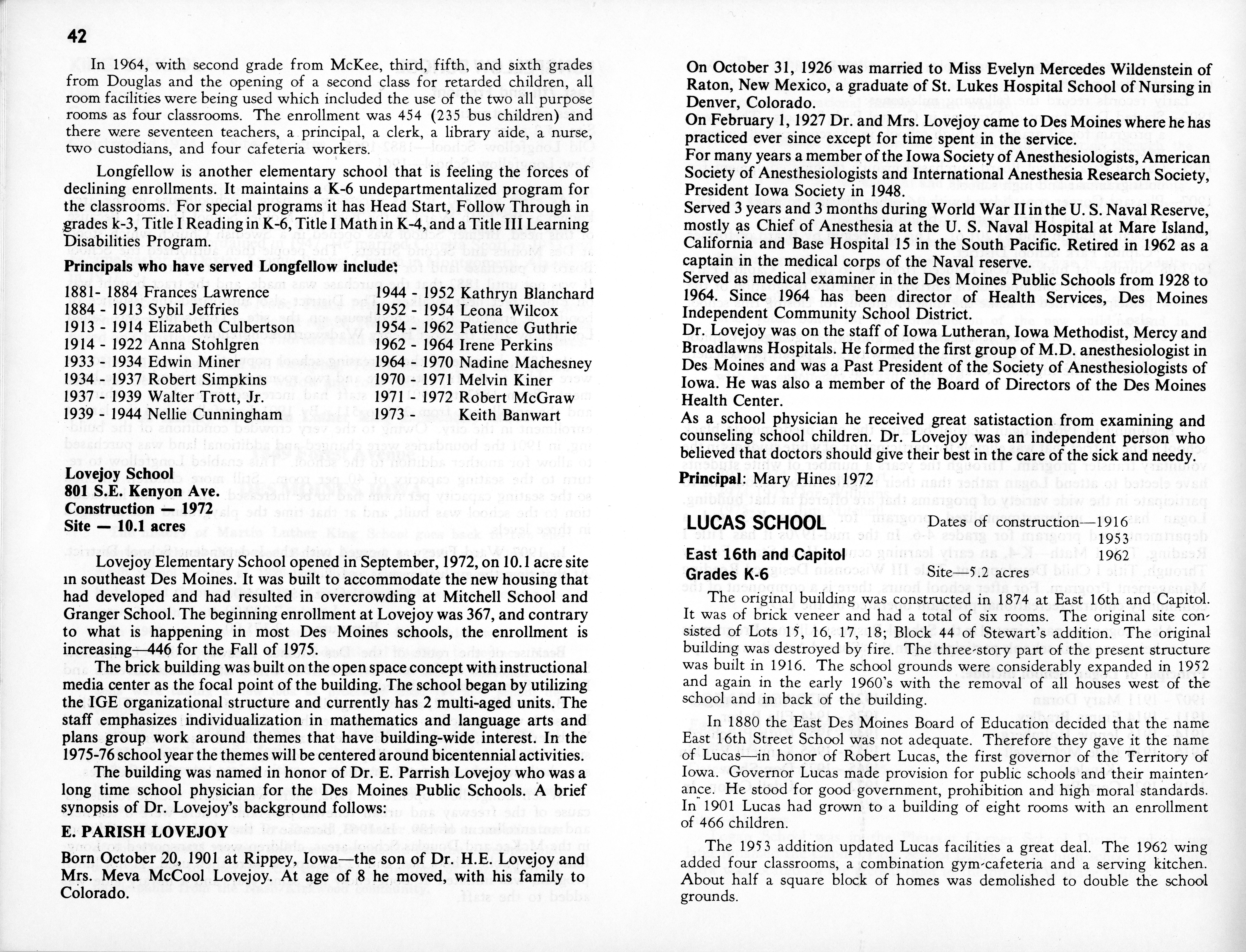 42 In 1964, with second grade from McKee, third, fifth, and sixth grades from Douglas and the opening of a second class for retarded children, all room facilities were being used which included the use of the two all purpose rooms as four classrooms. The enrollment was 454 (235 bus children) and there were seventeen teachers, a principal, a clerk, a library aide, a nurse, two custodians, and four cafeteria workers. Longfellow is another elementary school that is feeling the forces of declining enrollments. It maintains a K-6 undepartmentalized program for the classrooms. For special programs it has Head Start, Follow Through in grades k-3, Title I Reading in K-6, Title I Math in K-4, and a Title III Learning Disabilities Program . Principals who have served Longfellow include: 1881 - 1884 Frances Lawrence 1884 - 1913 Sybil Jeffries 1913 - 1914 Elizabeth Culbertson 1914 - 1922 Anna Stohlgren 1933 - 1934 Edwin Miner 1934 - 1937 Robert Simpkins 1937 - 1939 Walter Trott, Jr. 1939 - 1944 Nellie Cunningham 1944 - 1952 Kathryn Blanchard 1952 - 1954 Leona Wilcox 1954 - 1962 Patience Guthrie 1962 - 1964 Irene Perkins 1964 - 1970 Nadine Machesney 1970 - 1971 Melvin Kiner 1971 - 1972 Robert McGraw 1973- Keith Banwart Lovejoy School 801 S.E. Kenyon Ave. Construction â€” 1972 Site â€” 10.1 acres Lovejoy Elementary School opened in September, 1972, on 10.1 acre site in southeast Des Moines. It was built to accommodate the new housing that had developed and had resulted in overcrowding at Mitchell School and Granger School. The beginning enrollment at Lovejoy was 367, and contrary to what is happening in most Des Moines schools, the enrollment is increasingâ€”446 for the Fall of 1975. The brick building was built on the open space concept with instructional media center as the focal point of the building. The school began by utilizing the IGE organizational structure and currently has 2 multi-aged units. The staff emphasizes individualization in mathematics and language arts and plans group work around themes that have building-wide interest. In the 1975-76 school year the themes will be centered around bicentennial activities. The building was named in honor of Dr. E. Parrish Lovejoy who was a long time school physician for the Des Moines Public Schools. A brief synopsis of Dr. Lovejoy's background follows: E. PARISH LOVEJOY Born October 20, 1901 at Rippey, Iowaâ€”the son of Dr. H.E. Lovejoy and Mrs. Meva McCool Lovejoy. At age of 8 he moved, with his family to Colorado. On October 31, 1926 was married to Miss Evelyn Mercedes Wildenstein of Raton, New Mexico, a graduate of St. Lukes Hospital School of Nursing in Denver, Colorado. On February 1,1927 Dr. and Mrs. Lovejoy came to Des Moines where he has practiced ever since except for time spent in the service. For many years a member of the Iowa Society of Anesthesiologists, American Society of Anesthesiologists and International Anesthesia Research Society, President Iowa Society in 1948. Served 3 years and 3 months during World War II in the U. S. Naval Reserve, mostly as Chief of Anesthesia at the U. S. Naval Hospital at Mare Island, California and Base Hospital 15 in the South Pacific. Retired in 1962 as a captain in the medical corps of the Naval reserve. Served as medical examiner in the Des Moines Public Schools from 1928 to 1964. Since 1964 has been director of Health Services, Des Moines Independent Community School District. Dr. Lovejoy was on the staff of Iowa Lutheran, Iowa Methodist, Mercy and Broadlawns Hospitals. He formed the first group of M.D. anesthesiologist in Des Moines and was a Past President of the Society of Anesthesiologists of Iowa. He was also a member of the Board of Directors of the Des Moines Health Center. As a school physician he received great satistaction from examining and counseling school children. Dr. Lovejoy was an independent person who believed that doctors should give their best in the care of the sick and needy. Principal: Mary Hines 1972 LUCAS SCHOOL East 16th and Capitol Grades K-6 Dates of construction- 1916 1953 1962 Siteâ€”5.2 acres The original building was constructed in 1874 at East 16th and Capitol. It was of brick veneer and had a total of six rooms. The original site consisted of Lots 15, 16, 17, 18; Block 44 of Stewart's addition. The original building was destroyed by fire. The three-story part of the present structure was built in 1916. The school grounds were considerably expanded in 1952 and again in the early 1960's with the removal of all houses west of the school and in back of the building. In 1880 the East Des Moines Board of Education decided that the name East 16th Street School was not adequate. Therefore they gave it the name of Lucas in honor of Robert Lucas, the first governor of the Territory of Iowa. Governor Lucas made provision for public schools and their maintenance. He stood for good government, prohibition and high moral standards. In 1901 Lucas had grown to a building of eight rooms with an enrollment of 466 children. The 1953 addition updated Lucas facilities a great deal. The 1962 wing added four classrooms, a combination gym-cafeteria and a serving kitchen. About half a square block of homes was demolished to double the school grounds.