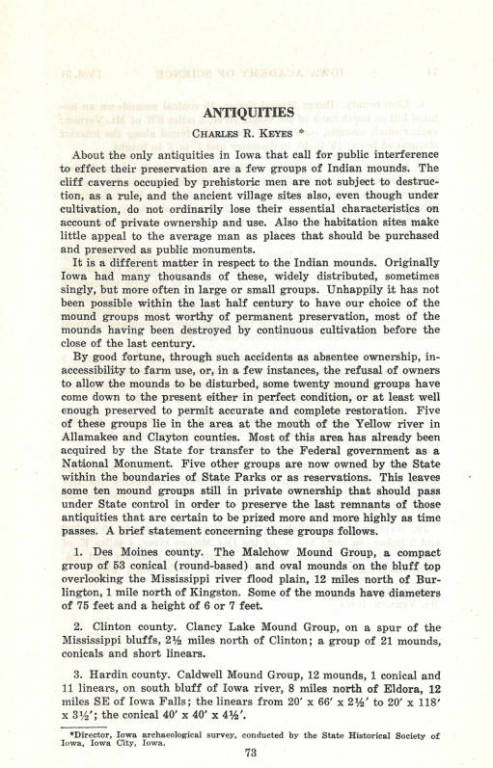 Dr. Keyes makes a case for preserving Indian mounds found in several eastern Iowa counties. He gives the location of each.
This article is from The proceedings of the Iowa Academy of Science, v.51,1944, p. 74

Education use only, no other permissions given. U.S. and international copyright laws may protect this item. Commercial use of distribution of this digital item is not permitted without written permission of Cornell College Archives

ANTIQUITIES Charles R. Keyes* About the only antiquities in Iowa that call for public interference to effect their preservation are a few groups of Indian mounds. The cliff caverns occupied by prehistoric men are not subject to destruction, as a rule, and the ancient village sites also, even though under cultivation, do not ordinarily lose their essential characteristics on account of private ownership and use. Also the habitation sites make little appeal to the average man as places that should be purchased and preserves as public monuments. It is a different matter in respect to the Indian mounds. Originally Iowa had many thousands of these, wide distributed, sometimes singly, but more often in large or small groups. Unhappily it has not been possible within the last half century to have our choice of the mound groups most worthy of permanent preservation, most of the mounds having been destroyed by continuous cultivation before the close of the last century. By good fortune, through such accidents as absentee ownership, inaccessibility to farm use, or, in a few instances, the refusal of owners to allow the mounds to be disturbed, some twenty mound groups have come down to the present either in perfect condition, or at least well enough preserved to permit accurate and complete restoration. Five of these groups lie in the area at the mouth of the Yellow river in Allamakee and Clayton counties. Most of this area has already been acquired by the State for transfer to the Federal government as a National Monument. Five other groups are now owned by the State within the boundaries of State Parks or as reservations. This leaves some ten mound groups still in private ownership that should pass under State control in order to preserve the last remnants of those antiquities that are certain to be prized more and more highly as time passes. A brief statement concerning these groups follows. 1. Des Moines county. The Malchow Mound Group, a compact group of 3 conical (round-based) and oval mounds on the bluff top overlooking the Mississippi river flood plain, 12 miles north of Burlington, 1 mile north of Kingston. Some of the mounds have diameters of 75 feet and a height of 6 or 7 feet. 2. Clinton county. Clancy Lake Mound Group, on a spur of the Mississippi bluffs, 2 and a half miles north of Clinton; a group of 21 mounds, conicals and short linears. 3. Hardin county. Caldwell Mound Group, 12 mounds, 1 conical and 11 linears, on south bluff of Iowa river, 8 miles north of Eldora, 12 miles SE of Iowa Falls; the linears from 20' x 66' x 2 and a half' to 20' x 18' x 3 and a half'; the conical 40' x 40' x 4 and a half'. *Director, Iowa archaeological survey, conducted by the State Historical Society of Iowa, Iowa City, Iowa. 7374 Iowa Academy of Science [Vol. 51]

4. Linn county. Burge Mound Group, 19 conical mounds on isolated hill on north bank of the Cedar river, 3 miles SW of Mt. Vernon; rather small mounds, such as are frequently found along the interior streams of Iowa; 15' to 40' in diameter and 1' to 3' in height.

5. Louisa county. Two large, well preserved mounds of the Toolesboro group, on a high bluff overlooking the Mississippi flood plain, the remnants of a group of six, four of which proved to be of Hopewell-culture origin when excavated by the Davenport Academy of Science during the seventies of the last century: the two mounds remaining are 70' x 70' x6' and 80' x 80' x 8'.

6. Marion county. Red Rock Mound Group, 5 conical mounds, ca. 55' x 55' x 3' on a bluff above the Red Rock ledges of the Des Moines river, 8 miles norht of Knoxville. The site is of historic interest on account of an important treaty with the Sauk and Fox Indians in 1843 and the location of the quarry from which came the stone furnished by the State of Iowa for the Washington Monument. About twenty acres are needed to preserve the site fully.

7. Webster county. Brushy Creek Mound Group, 48 mounds, 9 conicals and 39 linears, on a bluff overlooking the Des Moines river, 6 miles E. of Lehigh; the conicals are of average size, the linears average about 100 feet in lingth, 14 feet wide and 1'-2' high.

9. Webster county. Lehigh Mound Group, 5 conical and short linear, or oval, mounds, lying on a high bluff overlooking the Des Moines river, just above the town of Lehigh; two of the mounds are about 50' x 50' in diameter and 5' high.