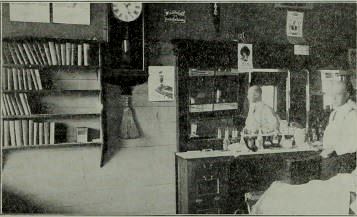 A Traveling Library Station set up in a barber shop in Garrison, Iowa.

Books for All Iowans

The Traveling Library plan was for the distribution of books from a center to people or localities geographically remote. To send books to people in isolated rural homes, at the country crossroads, and to the villages and towns where groups of people desired good books to inform and inspire. In the development of the library movement, efforts were made to establish a free public library in every city, town, village, county, or school district large enough to maintain it by local tax. It was the desire of the State in creating the Traveling Library System that it would foster and develop this local library spirit, and that such local libraries might be established. 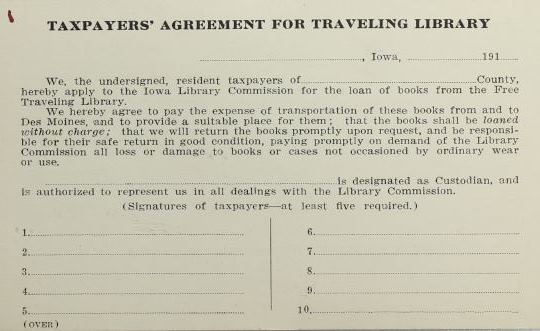 Taxpayers' Agreement for use of the Traveling Library of Iowa.

Who Can Use the Traveling Library

By law, the Iowa Library Commission was authorized to operate the Traveling Library collections to be loaned within the State to libraries, schools, colleges, universitees, library associations, farmers' institutions, study clubs, charitable and penal institutions, and to individuals, free of cost, except for transporation. The usual ways of securing books from the Traveling Library were through: (1) the local public library; (2) a library association, created for the purpose, where no tax-supported library existed; (3) a group of ten taxpayers, where no local associations existed; (4) club, schools and other organizations; or (5) individuals.

After signing an application card, residents were able to borrow books as long as they complied with the rules. Each borrower could take one volume at a time, with the exception of materials that were issued in more than one volume. Books were loaned for two weeks from the date of issue, and could be renewed once. A fine of one cent a day was charged for each book that was kept past the due date and fines were collected by the local library association for library expenses. No books were lent to anyone with unpaid fines.

The pages of loaned books were inspected when returned to their collection. Books returned after having been wet, torn, marked with pen or pencil, with book pockets or dating slips marked or torn, or with leaves or illustrations missing, were considered injured "beyond reasonable wear" and the librarian would collect damages from the borrower, or the local organization under agreement was held responsible.