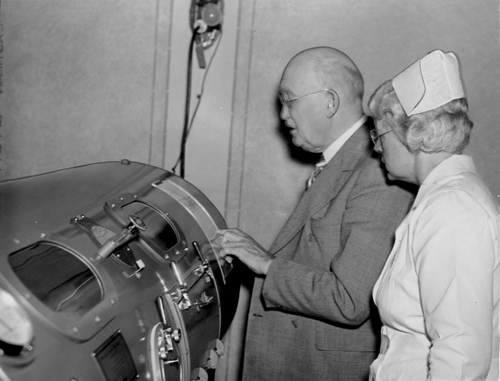 During the polio epidemics, the iron lung saved many thousands of lives, but the machine was large, cumbersome and very expensive: in the 1930s, an iron lung cost about $1,500—about the same price as the average home. The cost of running the machine was also prohibitive, as patients were encased in the metal chambers for months, years and sometimes for life: even with an iron lung the fatality rate for patients with bulbar polio exceeded 90%. 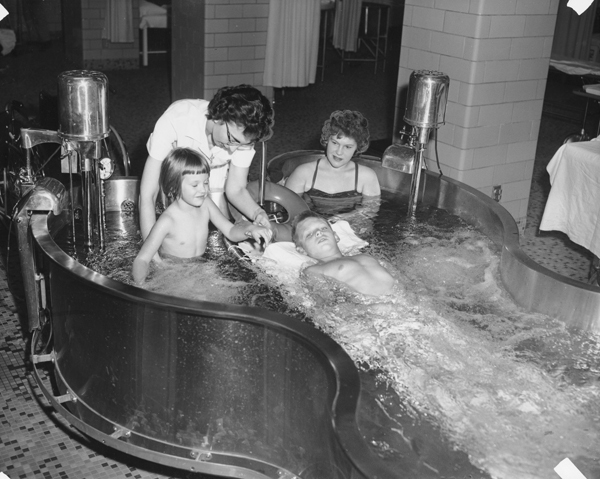 Polio patients whose muscles were paralyzed faced months, perhaps years, of arduous physical therapy to strengthen weakened muscles and to compensate for those atrophied because their motor neurons had been destroyed. In addition, many polio survivors would undergo repeated surgeries to fuse bones or to transplant ligaments and muscles in an effort to improve function. In spite of the best efforts of the patients, their therapists and surgeons, many survivors ended rehabilitation still significantly disabled by their paralyzed muscles.

Hydrotherapy, is a part of medicine and alternative medicine, that involves the use of water for pain relief and treatment. The term encompasses a broad range of therapeutic methods that take advantage of the physical properties of water, such as temperature and pressure to stimulate blood circulation and treat the symptoms of certain diseases. In 1926, Franklin Roosevelt, convinced of the benefits of hydrotherapy, bought a resort at Warm Springs, Georgia, where he founded the first modern rehabilitation center for treatment of polio patients, which still operates as the Roosevelt Warm Springs Institute for Rehabilitation. 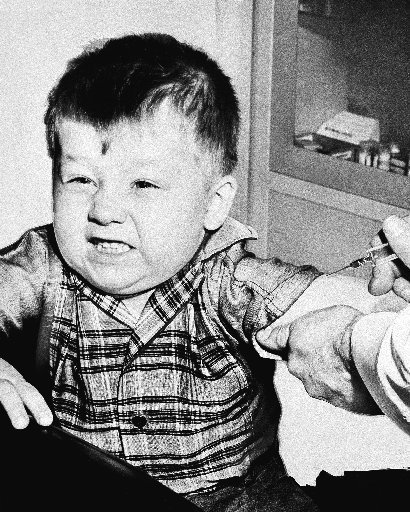 With no known cure and no way to prevent it, polio terrified most Americans. Hope finally replaced fear when the new Salk vaccine trial was tested successfully on 420,000 children in 1954. In Woodbury, Linn and Scott counties in Iowa, 13,000 children were part of the trial. The next year the Salk vaccine was available to the public. The Sabin vaccine replaced it in 1962. Both of these vaccines were effective in protecting against polio.

Remarkably, before Salk's final vaccine was released, hundreds of volunteers and medical professionals from the University of Pittsburgh, where Salk's research was being conducted, converged on Sioux City. They were the first responders to a crisis facing thousands of children and their terrified parents.

Finally, in Iowa, the tide began turning on the epidemic. And the trials pointed toward hope. Three years later, Dr. Jonas Salk became a national hero when he developed the first safe and effective polio vaccine in 1955 with the support of the March of Dimes. In the two years before the vaccine was widely available, the average number of polio cases in the U.S. was more than 45,000. By 1962, that number had dropped to 910.

A development that changed the polio experience was the establishment of the National Foundation for Infantile Paralysis (NFIP) in 1938. The Foundation achieved instantaneous popularity that reflected the contemporary popularity of its founder, Franklin D. Roosevelt. FDR’s polio disability translated into a systematic program to uncover the mysteries of polio and to lend a helping hand to Americans suffering from the disease. Through the fund-raising efforts of the March of Dimes, the NFIP sponsored and funded scientific and medical research to understand the virus and its actions in the body and to develop a vaccine to prevent the disease.

In addition, the NFIP spent substantial sums every year to pay for the care of the children, adolescents, and adults who developed paralytic polio. The publicity machine of the NFIP, with its March of Dimes posters, newsreels, and magazine and newspaper articles describing the latest scientific discoveries and offering advice on how to protect children against polio and what to do if the disease struck, soon made infantile paralysis both widely known and widely feared.

Organizations, including the March of Dimes and Iowa's labor unions, assisted with public information efforts and mass inoculations. In Dubuque over 7,000 people were inoculated within a 15-hour period in 1962. The cost of polio rehabilitation was often more than the average family could afford, and more than 80% of the nation's polio patients would receive funding through the March of Dimes. 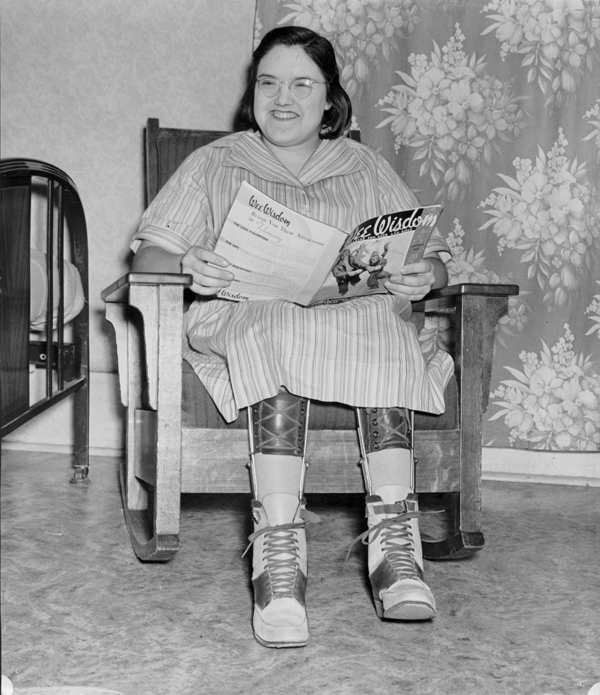 The polio epidemics changed not only the lives of those who survived them, but also affected profound cultural changes; spurring grassroots fund-raising campaigns that would revolutionize medical philanthropy, and giving rise to the modern field of rehabilitation therapy. The number of cases in Iowa dropped from 1,445 in 1954 to 580 in 1956. In 1957 they dropped to only 78. Polio has no cure, so prevention is the most effective means to combat it. Because of widespread vaccination, polio was eliminated from the Western Hemisphere in 1994.

As one of the largest disabled groups in the world, polio survivors also helped to advance the modern disability rights movement through campaigns for the social and civil rights of the disabled. The World Health Organization estimates that there are 10 to 20 million polio survivors worldwide.