The first-born child to Josiah and Lydia Harris Parvin, Theodore Sutton Parvin was born in Cedarville, Cumberland County, New Jersey, January 15, 1817. It was a small cottage town along the waters banks that empty into the great Delaware Bay. Going to school as a young child, they were taught in a schoolhouse that also served as the town's Masonic Lodge location. Intrigued by Masonry at a young age, Parvin and his school mates would peep through the keyhole to 'see what they could see'. His childhood days were filled with reading and studying, probably far more than most boys of his age. He had a very early interest in liturature and learning. When Parvin was 12 years old, in 1929, the family moved to Cinncinnati, Ohio to search for better opportunities in the less populated western front. In 1831 he was granted a scholarship to attend Woodward College, Ohio, graduating in 1833. Then, he promptly began the study of law, graduating from the Cinncinnati Law School in 1837, and was immediately thereafter admitted to practice. 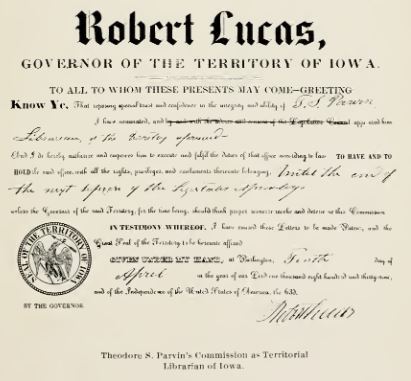 By an Act of Congress on June 17, 1838, the Territory of Iowa was cut from the Territory of Wisconsin west of the Mississippi River. President Van Buren appointed Robert Lucas as the Governor of the new Territory of Iowa, and Lucas selected Mr. Parvin for his private secretary. In 1839, Congress passed an appropriation of $5,000 to purchase books for the foundation of the territorial library. Parvin was recognized for his experience and knowledge of literature and he was appointed as the first Territorial Librarian of Iowa. Governor Lucas sent Parvin to Cinncinnati with a list of the appropriate titles to establish a new library. Parvin performed as librarian with precision and pride, he not only assisted in the selection of of the books that formed the territorial library but also, alone and unassisted, catalogued and shelved all the books in the collection.  Unfortunately, Parvin was not retained as librarian for a long period of time because the State of Iowa adopted a policy of appointing librarians for short terms and for political reasons, a policy now abandoned.

On August 22, 1838, Parvin received a commission to practice law in the Iowa Territory and on November 10th Parvin made his first appearance as an attorney in Iowa. Litigation was put on hold as the first meeting of the first Territorial Legislature began on November 12th, and Parvin was overwhelmed with an immense amount of clerical work in the Governor's Office, and executive business seems to have kept Parvin busy. Then on November 28th, he was admitted to practice before the Supreme Court of the territory. In 1939, Mr. Parvin was appointed as the District Attorney for the middle district of Iowa and moved to Muscatine, then known as Bloomington. In 1840 he served as secretary of the Territorial Council, and in 1844 was a member of the Constitutional Convention.  As a member of the Constitutional Convention he, with Lieutenant-Governor Eastman, and Hon. Shepard Leffler, successfully stumped the middle district of the territory against the adoption of the proposed constitution because the boundaries of the state would cut Iowa off from the Mississippi river. To him and his collegues the defeat of that measure was imparative. 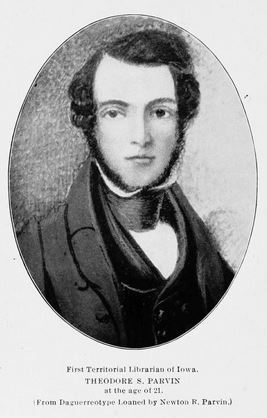 Remaining in the Courtroom

From 1848 to 1850 he was a County Judge. This was a position of much power and responsibility, because the county judge in those days had more power than the present board of supervisors. At the end of two years he resigned as County Judge and was elected for three consecutive terms as Judge of Probate Court. When the U.S. District Court for Iowa was organized in 1847, he was appointed its clerk, a position he held until 1858—eleven years. In 1858 he served a one-year term as Register of the State Land Office. In August of that year he appeared before the Hon. Thomas S. Wilson of Dubuque, then associate Judge of the Supreme Court of the Territory, by whom he was admitted to practice at the bar. At the first session of the Territorial Supreme Court of this state Mr. Parvin was the youngest of twenty attorneys who were admitted to practice.