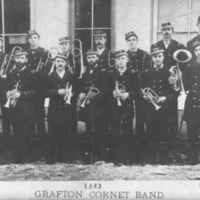 Oskaloosa College was founded in 1863 by the Christian Church. In 1881 a number of faculty moved to Des Moines and founded Drake University. In 1902, the building was purchased by Charles S. Burton of Canton , Missouri, and he moved his correspondence school to Oskaloosa. Eventually, this organization would be investigated for using mails to defraud, In 1920, C.L. Barnhouse Company purchased the building for their music conservatory and business.

The John P. Vander Maas Railroadiana Collection, held by the University of Iowa Libraries Special Collections Department, includes hundreds of thousands of items related to the American railroad industry. For over 30 years, John P. Vander Maas collected the timetables, train orders, menus, tickets, passes, postcards, business forms and other ephemera from multiple railroads across the country. Vander Maas also collected hundreds of images of locomotives and equipment and depots for multiple railways across the country. This digital collection represents Vander Maas' collection of railroad depot photographs from the state of Iowa, held in scrapbooks where images are organized by state, county and town. The photographs document extant and long-abandoned depots in images dating from the late 1800's into the 1980's. The bulk of the photographs date from approximately 1950 to 1980. A valuable resource for both railroad aficionados and scholars, the Vander Maas collection is one of the most impressive gatherings of railroad source material in the country. 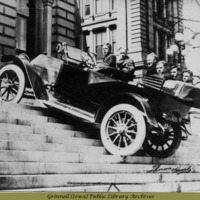 Spaulding at the Iowa Capitol Building. 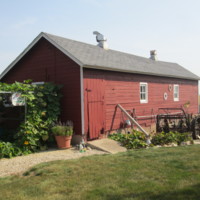 This collection consists of documents and photographs of some of the eight Tyden farms that inventor and industrialist Emil Tyden owned around Dougherty, Iowa during the first half of the twentieth century. Tyden arrived from Sweden at the age of 19. His inventive brilliance began with contributions to the Chicago World’s Fair in 1893 and ended just before his death in 1951 with the invention of the dry sprinkler fire suppression system manufactured by The Viking Corporation. The invention for which he became best known – the boxcar seal – established Hastings, Michigan as a manufacturing capital. More than 4 million of Tyden’s boxcar seals were manufactured from his plant in Hastings. In northeastern Iowa, Tyden accumulated and later operated a modern agricultural operation of some 3,000 acres in the 1940s.

Ted and Judy Pitzenberger have owned Tyden farm #6 since 1994 when they purchased the 10 acre property when it came up for sale. Ted grew up in the area on a farm and was familiar with the Tyden legacy. What drives Ted and Judy first is the importance of preserving the family farming legacy of both of their farm families. Tyden farm number 6 is open for tours where families can come and learn about the history of Emil Tyden and his eight farms.

The Historical Bookbinding Model Collection is a resource used in book studies courses at the University of Iowa. These models represent and demonstrate the structures and characteristic mobility of books across time and cultures. The collection is housed in the Preservation department of the University of Iowa Libraries. The collection can be accessed by maker, education function, structure name, culture context, production context and century of prevalence. The search terms used are provided in a thesaurus. 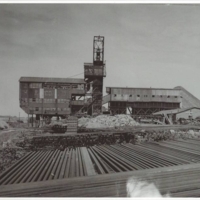 Shuler Mine with Railroad Ties and Rails.

There were coal mines all over the state of Iowa in the late 1800’s, and speculators first surveyed Waukee, Iowa in 1883 The Harris Mine opened on September 20, 1920, just two and a half miles northeast of Hickman Road in Waukee. The Shuler Mine, owned and operated by The Shuler Coal Company, opened in 1921. It was the largest producer of coal in Iowa, and it had the deepest mine shaft – 387 feet. It was located one mile east of Harris, until it closed on May 27, 1949. It employed up to 500 men and used 32 mules. This collection includes photographs of the Harris and Shuler Coal Mines community.